Mystery - The door in the Lebombo Mountains.... 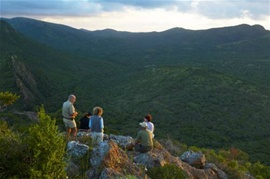 Mystery - The door in the Lebombo Mountains....

The door in the Lebombo Mountains....

The following story was told to me by a former caretaker of the Talana Museum. For prosperity’s sake I am recording this for I do believe that he was telling me the truth.

An ox of a man, as well as having served in the S.A. Army, a no-nonsense type of person, I do believe this was not a made-up story, as I have had the same type of experiences myself.

The family were well-known farmers from the Paulpietersburg district (I also think that is why he told me this, since we come from the same area). Every winter the whole family used to go on a three week hunting trip to the Lebombo mountains, near what is today Jozini and the Makhathini flats.

One day, J and his brother were on the trail of an antelope, and following a winding path, filled with dense shrub, with the cliffs of the Lebombo towering high above them. This was one of their favourite haunts, and the camp was deeper down in the valley.

J. said that they always had a funny feeling when camping there that they were being watched. His grandfather often would tell them that someone was living in the mountain, but they thought he was spinning a yarn.

On this particular day, the antelope suddenly seemed to “disappear.” Nothing daunted, he decided to see if he could not find a way to go higher up the mountain. To his utter amazement, he found beautifully carved steps winding their way up the the sheer cliff of the mountain!

They decided to climb up the steps….. Higher and higher the steps went, until they found themselves on a ledge or terrace ….. halfway up the cliff. What astounded them was that there was a beautifully crafted stone fountain in the middle, and the floor was smooth and polished. In fact, the whole terrace looked as if it had been cut out of the sheer rock of the cliff.

What was even more astounding, was that it looked as if someone was actually living there! There were pots and even some scraps of food lying around…. Yet they could see no-one… just the sheer walls of the beautifully carved out side of the cliff. What was even more fascinating to them was the way in which the fountain and the seats were formed… the huge blocks of stone were cut with such precision and smoothness, that you could not even put the blade of a pocket knife between the stones!

He had had the funny notion that there was a door in the sheer cliff and he started knocking on the Cliffside to test if something sounded hollow…. When to his greatest astonishment, the door actually opened!

He was looking into a type of passage way and it was also beautifully carved out and winding its way into the mountain!

This proved too much for his brother, who fled!

He had the absolute feeling as if someone was willing him to step inside, but he also knew that should he do so, he would never be able to return…. At that moment he saw a very tall man, white man beckoning him to come inside….. He got such a fright that he took flight - stumbling down the steps!

When he found his brother hiding in the bush, they both told their grandfather what had happened. He laughed and told them that the very same had happened to him.

That door kept haunting him, and in the following year, he decided to go there once more, to see if he had not imagined it after all. He found everything exactly as he remembered, except that this time there was no food lying around. He went to the place where the door had opened….. but he knew that this time he would not be able to turn back….. he decided to leave.

This door would haunt him for the rest of his life and he still wanted to know what was lying behind it….

And he told his son about it….

The son also found the place but also had not the courage to look for the door.

Then, J. says, the strangest thing happened to him. One day, walking in the street here in Dundee, someone taps him on the shoulder. It was a well-known psychic in Dundee, and he invited him to come and visit him. “There is something I have to tell you about that door that you saw.” And then the man promptly turned around and left.

After some time J. did go and see him and to his amazement, the old man told him that the man in passageway, was part of an underground civilization and that he still could go back and go through that door if he wanted to - but then he would not be able to come back again. The old man also told him that this was the remnant of the very ancient civilization and that they had been living there for thousands of years and are still living there and that it was a highly advanced civilization too.

Since then he had avoided the place, but somehow it kept calling him and one day he wanted to go there and go through that door…….